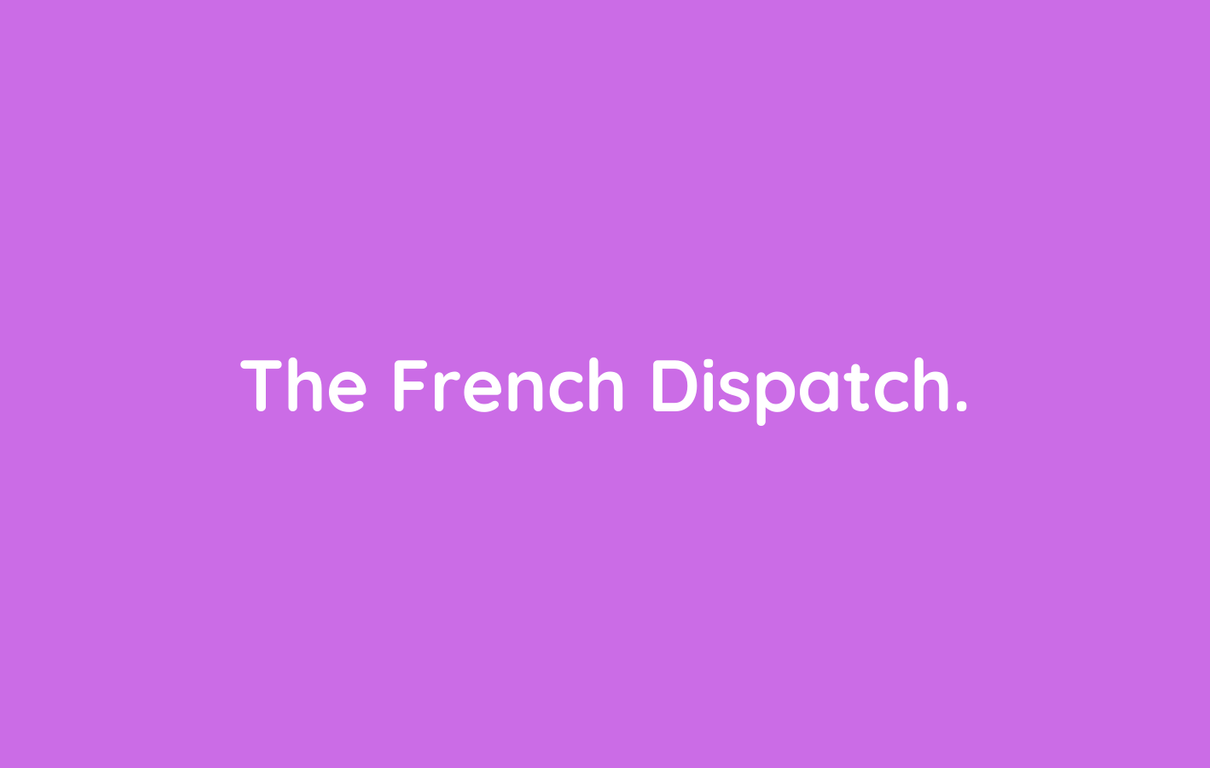 Amy on our team loves books, the media and the movies. Something she watched recently inspired her to write a blog post that covers three of her favourite things. Enjoy!

Set in the ingeniously titled Ennui-sur-Blasé, France, The French Dispatch documents the construction of the final issue of the fictional literary force Liberty - the Sunday supplement of the Kansas Evening Sun newspaper.

Bill Murray plays the magazine’s highly regarded editor, Arthur Howitzer Jr., who set out to transform Liberty from a drab newspaper supplement to a tour-de-force of literary accomplishment. Having finally setting up base in Ennui-sur-Blasé, Howitzer hired a group of exceptionally talented, beautifully bonkers bunch of the best writers he could possibly find.

The French Dispatch follows Anderson’s star studded cast of eccentric journalists as they pull together the final edition of Liberty after Howitzer’s death, featuring Howitzer’s obituary and a range of the magazine’s best writing from across the years.

The film is chaotic, jumping from scene to scene and story to story in true Wes Anderson style. It’s almost baffling in its ability to switch tone and genre at the drop of a hat, showing off Anderson’s genius as a scriptwriter and director.

Ranging from a travelogue from a writer on a bicycle glorifying the shady underworld of Ennui-sur-Blasé, to the ethically dubious writings of a journalist caught up with the student protest leading subject of her investigations, to a lecture of art on a criminal artistic genius and food writing turned true crime, Anderson’s film celebrates the inexhaustible range of human interests.

We all love a good story, and Anderson takes that and runs with it.

Few films have brought me as much glee on initial viewing as The French Dispatch. It’s a truly joyful showing, and a OTT love letter to journalism and storytelling as a craft. Anderson’s narrative bounces from story to story without taking a breath, which would be relentless were it not for Anderson’s (and his journalists’) sheer love of the tale.

The French Dispatch offers a wonderful and well-needed break from the news of the real-world mainstream media. As spirits are down and journalists - especially regionally - feel the weight of reporting on their shoulders, Anderson reminds us that there are narrative treasures still yet to be found in the world. I just love it.

Although, like Anderson, I’m prone to romanticising, there’s little harm in believing that it might be possible to find stories like those in The French Dispatch in reality. But whether that’s the case or not, let’s keep celebrating the stories that get us excited and humanity’s love of a craft.