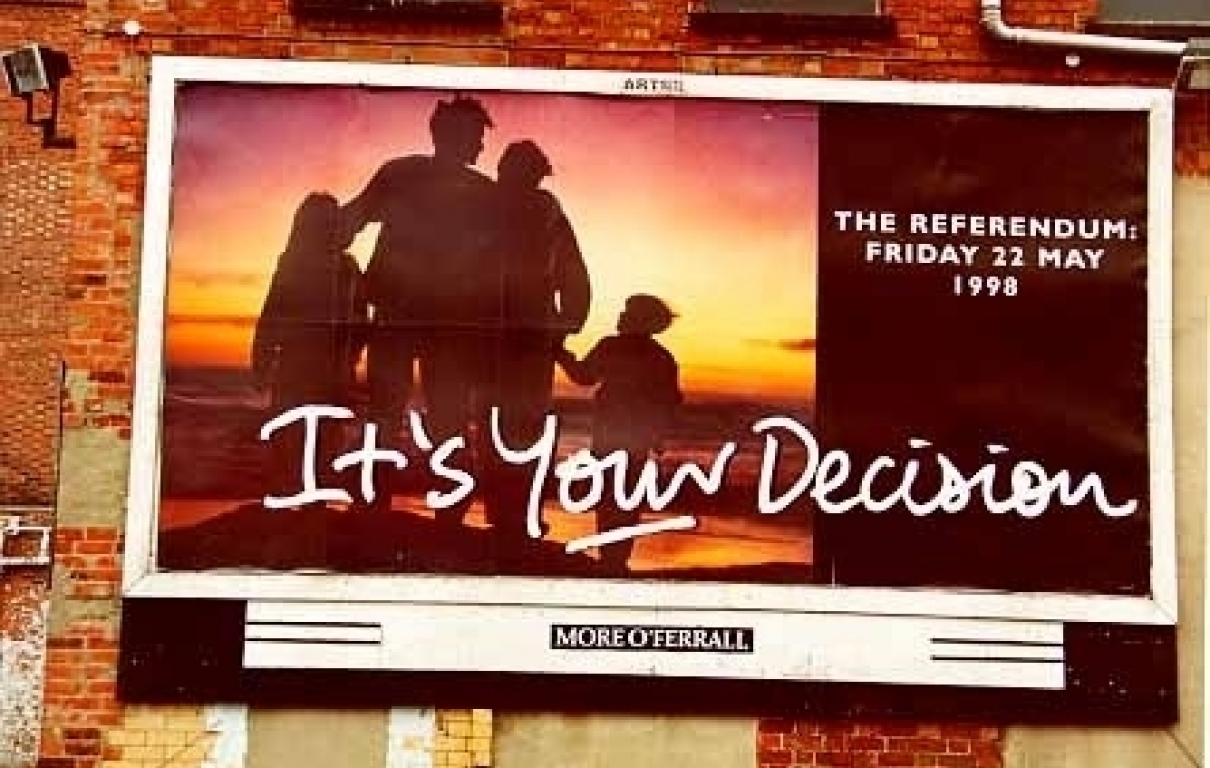 This week, Belfast has been awash with A-list politicians and world leaders, who have descended on the city to mark the 20th anniversary of the signing of the Good Friday Agreement. While the ins and outs of the agreement have been debated up and down the country for many a year, its benefit of bringing peace to our country has been unquestionably life changing for us all.

A lot has changed here since 1998. Is '98 really 20 years ago? Blimey. Anyway, here’s our take on the place we call home and how it’s evolved since the signing of that famous agreement.

I think being born in 1996 means I have a different perception of Northern Ireland to my parents, and their parents. To me it’s always been a pretty damn fabulous place to live. Cue my ode to Belfast…

One of my favourite things about 'our wee country’ is exactly how ‘wee’ it is. I love that within an hour's drive you could pass a bustling city, the beach, forests and mountains. Although I’m a Belfast city girl at heart, geographically it’s a land of variety and I don’t think I appreciate that enough sometimes (probably because i'm lying on the sofa watching Netflix)

I’ll always consider Northern Ireland home. I love the people, the places and, most importantly, the food. What do you mean they don’t have potato bread, Tayto Cheese and Onion, Veda, pastie baps and champ everywhere? I swear, food just tastes better here.

In terms of work, the ‘wee’ nature of Belfast means it’s also a fabulous place to network. Everybody really does know everyone so chances are you’ll probably bump into that person you wanted to speak to without even trying.

If you’re trying to dodge anyone I’m sure that means it’s also a bit of a nightmare...but the feeling of familiarity is part of what makes here so special to me.

Claire (the one from New York)

I didn’t grow up in Northern Ireland so it’s difficult for me to reflect on how the Good Friday Agreement impacted my life. That said, growing up, Belfast was not a hot destination spot for tourism. Dublin, Cork, Galway - those were the places I associated with travelling to this geographical region.

Today, Belfast is buzzing and there is so much to explore when I have friends and family come to visit from the USA. The incredible business growth, food and drink, and international attention that Game of Thrones has brought to Northern Ireland has definitely put it on the map as one of the best places to visit.

I was reminded of one of the best things about living here recently when I went for a casual walk with my husband around our new neighbourhood. Nothing special, but it was sunny outside so we wanted to enjoy the weather. We got to the top of a hill and and were completely surrounded by gorgeous country fields with horses and sheep. You could see for miles. It was such a wonderful reminder of how gorgeous Northern Ireland truly is and how lucky we are to be surrounded by such natural beautiful.

Claire (the one from Bangor)

I would have to say the best thing about working and living here in Northern Ireland has to be the people. We are a weird but wonderful bunch of of friendly, warm and welcoming folk. The people of Northern Ireland tend to be fiercely loyal, super-supportive and you will always find someone ready to offer a helping hand (or a cup of tea) if you find yourself in a time of need - this community feel is a trait that is engrained in our nation and will never change.

Thankfully lots of changes have occurred in the last 20 years. Our wee country has come on leaps and bounds, with the main change being that violence no longer rules the headlines. We have moved forward and accepted that some things are far better left in the past. We are more comfortable celebrating our culture, and want to promote the great reasons there are to visit Northern Ireland.

I think the only way you’ll notice real change in a place is if you leave it. In the few years I was studying and working in England, every time I came home to visit it felt Belfast was becoming a more positive place.

Finally, when I moved home in 2015, in some ways it was a very different city to the one I had left. Tourists were flooding in, nightlife in town was transforming into something more reflective of a modern city and business, particularly the creative industries, seemed to be taking off. In twenty years, many would say the city has become an attractive place to live and work with hipster coffee shops, trendy bars and restaurants and a geography that means you can get from the office to the countryside or shops in no time. The history is inescapable though and how much the positive changes are reflected beyond Belfast and across Northern Ireland is up for debate.

Northern Ireland of 2018 is likely unrecognisable to the peace brokers who were here in 1998, but people who have been living here the whole time may notice change a little less (other than C&A closing and the Half Bap now being called the Cathedral Quarter). Some people will tell you Northern Ireland is changing for the better with a more positive, outward looking and welcoming attitude. Others say it will never change. It’s possible neither is entirely wrong.

I was four years old when the Good Friday Agreement was signed so I don’t remember much from that time, but growing up near Ireland’s border regions meant that, for me, helicopters overhead and checkpoints were common place. As a child I didn’t really understand any of this but the Belfast Agreement has allowed me to grow up in an era of peace, and that I do understand.

What I love about living here are the common threads between the people I meet – everyone seems to know everyone and we all share the same playful, self-deprecating humour that has become synonymous with the people here. Just ask the supporters of Northern Ireland and the Republic of Ireland who were awarded the Medal of the City of Paris for their sportsmanship during the Euros in 2016 – not a bad thing to be famous for!

As for working here? Belfast and Dublin’s ability to attract the biggest companies from around the world has made me realise that opportunity doesn’t just lie in London, New York or Berlin - it’s right on our doorsteps. For a small landmass at the edge of Europe, we’re not too bad!

I truly believe Belfast has done a full 360 in the past 20 years. Sure, there is still the odd political debacle but, thankfully, nowadays our news is not dominated by it. I like to think that instead of focusing on Northern Irish politics we are now starting to shout about our culture.

Northern Irish people are renowned for being a super-friendly bunch and I believe, thanks to the arrival of the shopping mecca that is Victoria Square, attractions such as the Titanic Exhibition and the copious amounts of hotels that are popping up throughout the city, we can really showcase this hospitable personality!

The people are the best thing about this country - they truly are a marvellous bunch (my family and friends included obviously). I love that you can be on a night out and next thing have made a best friend for life.

With regards to working here, again for me it’s all about the people. I love working with a variety of people and building relationships with them, whether that’s colleagues, clients or suppliers, it’s great to work with such a range of people who are all truly passionate about what they do.

I was 14 years old when the Good Friday Agreement was signed, and I didn’t really understand at the time what it meant. My ma kept telling me that it would bring peace and with the World Cup (France ’98) looming, Arsenal winning the Premier League for the first time since 1991 and Ballymena United back in the Irish Premier League after being relegated the previous season, life was pretty good for me.

Personally, I think the country is unrecognisable from the one I grew up in, but we’ve managed to retain a sense of working class pride and the gallows humour that guided my parents and their parents through the darkest days of the Troubles. It hasn’t all been plain sailing, but in the 20 years that have passed since the signing of the Good Friday Agreement, we’ve created a country to be proud of. A place that’s nice to visit. People who are good craic to talk to. Cities that are amazing places to do business. The Green & White Army even qualified for a major tournament. It’s a great time to be alive.