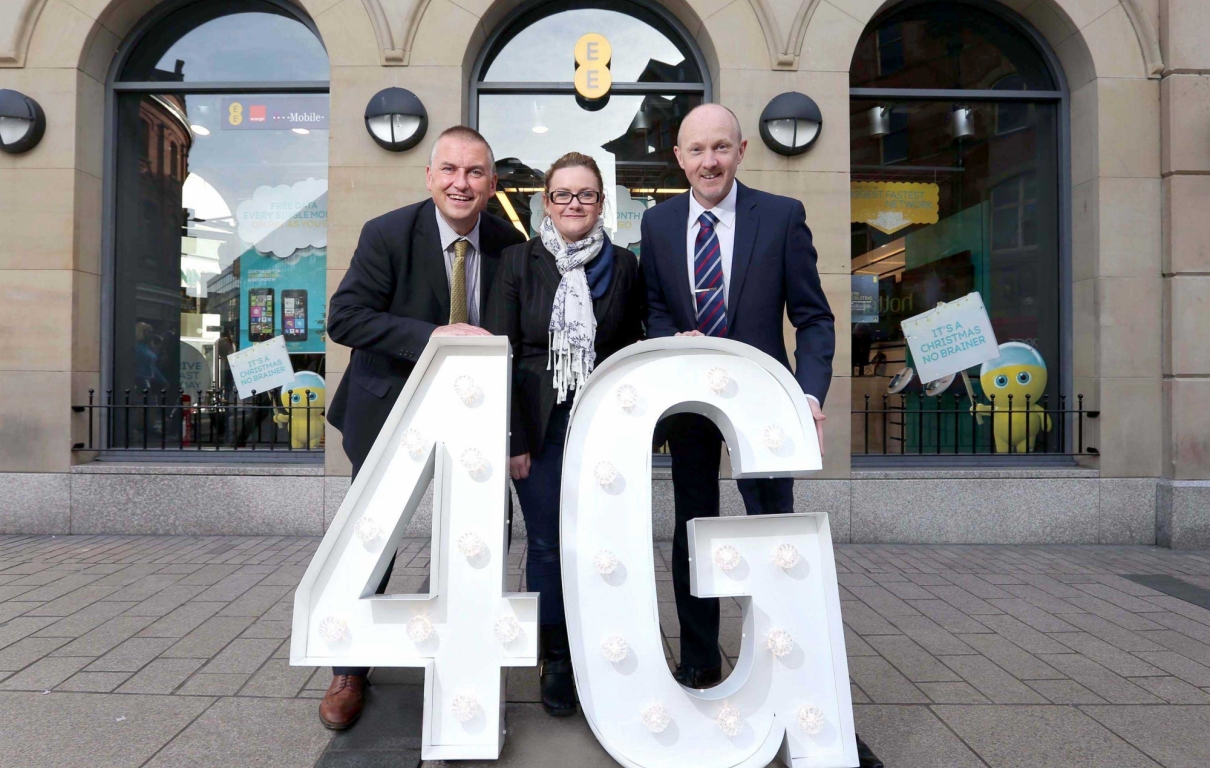 4th November, 2014 – EE, the UK's largest mobile operator, today announced that it is upgrading its mobile network in Northern Ireland to provide double speed 4G across the country. EE's high speed network will reach 82 per cent of the population. With increased capacity, average data speeds and phone call performance, Northern Ireland residents now have access to one of the best mobile networks in Europe.

Enterprise, Trade and Investment Minister Arlene Foster said: “The upgrading of EE's mobile network to provide double-speed 4G across Northern Ireland is welcome news for consumers and businesses alike. Northern Ireland residents will now have access to some of the fastest data speeds in Europe, meaning we will be amongst one of the best connected areas in terms of speed and capacity. The upgrade is also good news for consumers who will be able to take advantage of the choice of providers added to the mobile market.

EE's 4G network is being used by many businesses across Northern Ireland, including Shoot Communications, a Belfast-based business that supplies communications equipment to the TV and film industry. Shoot is trialling double-speed 4G to transfer large numbers of pictures, video and text quickly and reliably across film sites in some of the most remote locations in Northern Ireland. The production crews of some of TV and cinema's biggest hits have used EE-powered devices to bring their productions to life and the network continues to play a key role in helping develop the Northern Ireland film industry.

Sacha Patterson, Managing Director of Shoot, commented, “The successful production of a TV show or film relies on the crew being able to communicate across multiple sets and filming locations, and this is something that EE can offer through its superb 4G network. Whether it's a director streaming the day's filming on a phone or prop makers sending large images of their latest creations, it's vitally important that the network offers reliable and superfast data services. We have used EE for several years because it offers unrivalled speed and reliability through continued investment in its network.”

The double speed network will give Northern Ireland residents access to EE's high capacity, high speed network, with top speeds of 60Mbps and an average of 24-30Mbps. The increased capacity will enable a consistent performance, even if the number of people using the network doubles. With double-speed 4G, customers and businesses will be able to watch HD videos on mobile devices, access large files and multi-task more easily, without the need for a fibre connection.

All major cities will be covered, allowing businesses to benefit from improved speeds and capacity on both indoor and outdoor coverage.

EE was the first network to launch 4G in Northern Ireland, in December 2012. EE is also the only operator in the UK with the necessary combination of spectrum bands and mobile sites to undertake the network upgrades needed to deploy double speed, double capacity 4G mobile services across Northern Ireland.

“EE was the first network to launch 4G in Northern Ireland in 2012, and the launch of double-speed 4G services in the country is the result of continued investment here. The benefit to Northern Ireland will be immense; it will enable a better consumer experience as well as meaning the country's cities such as Londonderry and Belfast will be able to compete with the biggest and most technically advanced across Europe.”