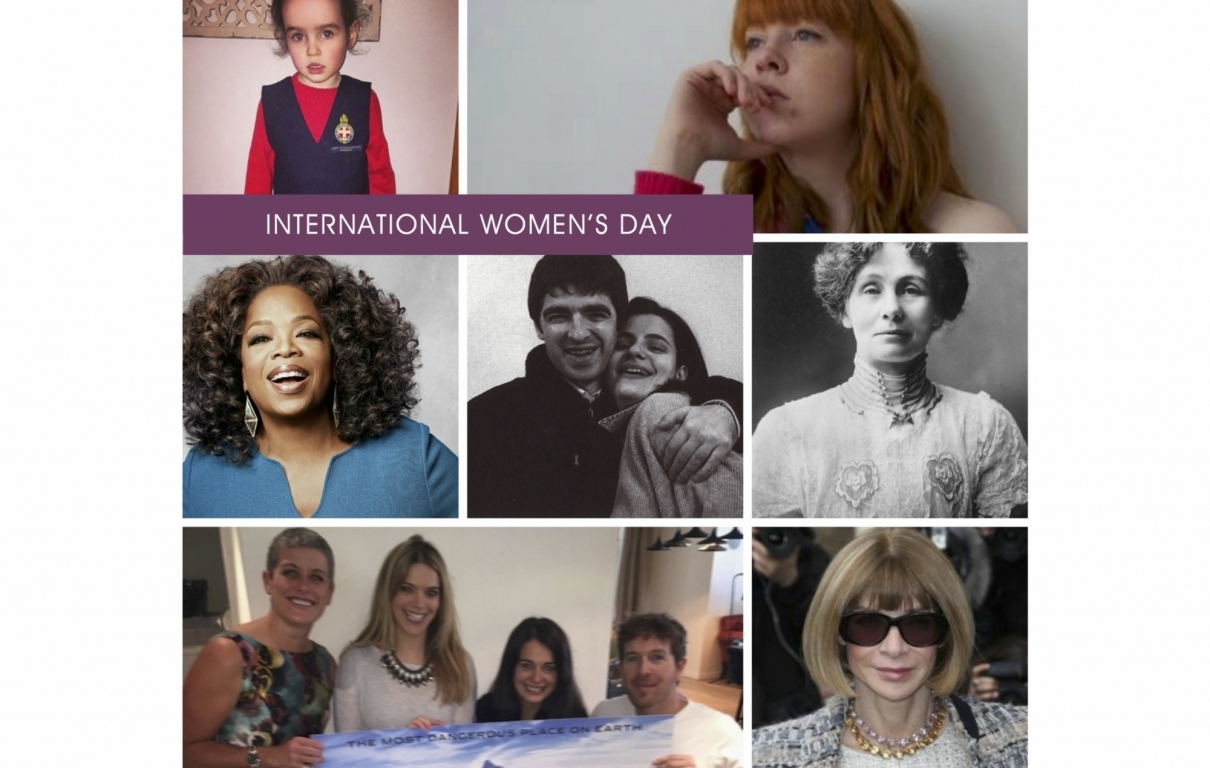 As on ode to International Women's Day 2018 we invited the team to tell us about an inspirational, courageous and determined woman who they look up to and serves as a great example in their life. Obviously, for most of us, that person would be our mother but as it’s Mother's Day this Sunday we chose to exclude mums from this one (sorry mum). Fear not you’ll get your time later in the week ladies.

So, team take it away…

Other than my multi-tasking, multi-talented and ever-fabulous mum, a woman I find inspiring is Dame Anna Wintour.

Often dismissed as a stiff b*tch, Anna Wintour has been the editor-in-chief of US Vogue since 1988 and is the most powerful woman in media. After all, you don’t get books written about you, documentaries made, and Meryl Streep depicting you in a film without being a total icon. Anna Wintour has been irrefutably influential in fashion media over the past few decades, and continues to be the First Lady of fashion with her trademark slick bob hairstyle. She was even made a Dame last May for her services to fashion and journalism over the years.

I remember watching The September Issue documentary when I was younger and thinking that Anna Wintour was #CAREERGOALS. This ultimately made me want to work in media, and was a factor in me going on to study PR at university a few years later. Anna worked her way up in the industry, dared to take bold editorial risks and make her creative mark, and has continued to show her passion for her work, even at a point when others would think of retiring from an infamously exhausting role. In my opinion, that makes her pretty bad ass!

“Fashion goes in only one direction - forward - and I am a firm believer in thinking that way, too.” - Anna Wintour.

My inspirational woman is Maggie Mouzakitis. She’s perhaps not as instantly recognisable as some of the other names on this list, but just as important (to me, anyway). Maggie was the tour manager of a band called Oasis, guiding the boys through much of their careers in stadiums, festivals and arenas. If you know anything at all about Oasis, you’ll know that they would have been an absolute nightmare to manage and Maggie managed to keep the show going in incredibly difficult circumstances. She’s probably second only to their ma, Peggy, when it comes to spending the most time with Liam and Noel Gallagher together, in one place, and for that reason alone she’s an inspiration. Thanks for keeping it going, Maggie - music, and my entire life, would be a much poorer place without you!

With mammies discounted I probably wouldn’t be allowed back in to the house if I didn’t mention Sonja Sleator for this. No matter what is thrown at her she manages to come out smiling and positive. Diabetes? No bother. Chronic urticaria? Completed it mate… She works her ass off with a job, being a part time musician and goes further than most people reasonably do to take care of her family and friends, usually at the expense of her own free time and health. So yeah, high fives all round for ginger face.

There are so many women who have inspired me over the years: all of the Spice Girls, Carrie Bradshaw, Alanis Morissette, Penny Crayon, the ladies of AB Fab (spot the 90s kid)!

But, I must dedicate this one to my late grandmother, Lily G. That lady was a legend; not only was she a mother of 3 very testing children, one of which was my mother, but she was also a grandmother to 11 and a great grandmother to 17.

My granny was also an entrepreneur, which in her time was very rare and almost frowned upon. Lily G was a seamstress, perhaps thats explains my love of fashion, she made clothes for all the lovely people of Co. Armagh. From bridal gowns to Irish dancing dresses she made it all. My barbie dolls frequently donned a Lily G creation and I loved it!

My granny was also fearless, many a time I watched her stand up to people in defence of some stupid thing I, or one of her other grandkids had done. The woman showed no sign of weakness and went to great lengths to ensure her family were protected at all times.

So today, I would like to salute my Granny G.

Oprah needs no introduction. She is a role model, leader, mogul, guru, muse and maybe...the future US president.

That said, the reason I find her so inspiring isn’t because of her status as the most powerful woman. It is because of who she is as a human being. Oprah lives without fear, embraces her “authentic self”, never settles for the status quo, says thanks for the small thing and loves with her entire heart. All of which I aspire to live by every day.

Her recent speech at the Golden Globes encapsulated her ability to create a movement and captivate an audience. Her speech had me in tears, and I will never forget when she said, “A new day is on the horizon.” Every little girl watching that speech will grow up believing that they matter, that they have a power within themselves and that no one has the right to dim their exquisite light.

"Think like a queen. A queen is not afraid to fail. Failure is another steppingstone to greatness.” - Oprah

As a history and politics graduate, my choice might be a tad predictable. One of the most inspirational women in history for me is Emmeline Pankhurst. Although far from perfect, she spearheaded the suffragette movement whose efforts led to women receiving the vote. We have a lot to thank the fearless women of the suffragette movement for, throwing themselves under horses and chaining themselves to railings so we could play an equal role in political society.

Long story short, they were some bad ass women.

OK, OK, technically my choice isn’t a woman as she is only 3 years old, but my daughter Vogue, is my inspiration for International Women’s Day. In the short time she has been on this planet, she has already taught me some valuable lessons in love, compassion, joy and patience. Isn’t it funny that we think our jobs are to teach our children and those younger than us, when really, it’s the other way round! She motivates and inspires me every day, not only to be a better woman, but to be a better person.

Ugh this is hard. I want to say Cher Horowitz but in the spirit of choosing a real life person...

There are lots of amazing people who inspire me - male and female. I love people like Lisa Ling, Amelia Earhart, Helen Sharman...people who travel across the world (and Universe) and put their lives at risk to pioneer, explore and discover.

However there’s a female who I met a couple of years ago when we were working with Universal Pictures on the release of Everest that has left a lasting impression on me. Hannah Shields summited Mount Everest in 2007 and is the most energetic, fearless and inspiring person I’ve ever met in real life. She has been to the top of the world, confronted a polar bear at The North Pole and has run multiple marathons. She is also a full time dentist. When we were working with Hannah she told us about how she befriended the Russian climbers during her Everest expedition, shared their vodka and celebrated her summit with a bag of Tayto crisps. She also brought her lipstick with her for the entire climb. What a legend.