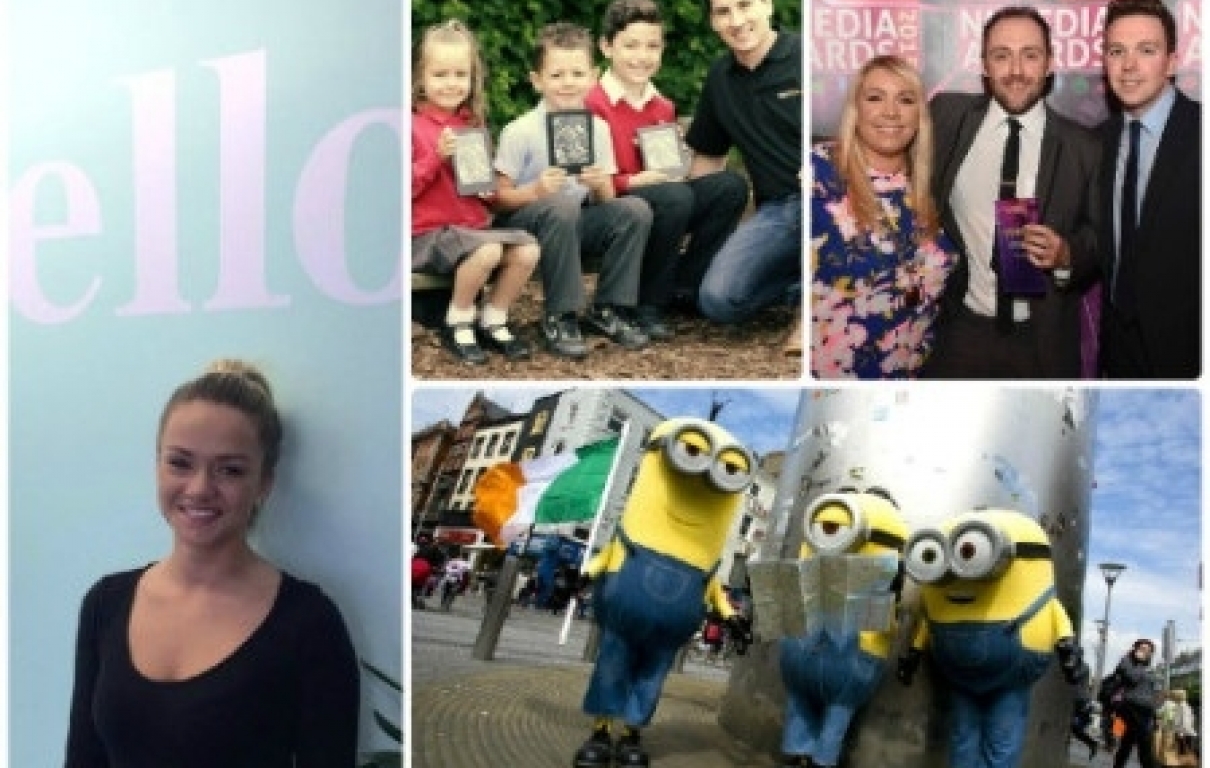 We've just finished what feels like the busiest month we've ever had at Clearbox, so we thought we should tell you some of the stuff we've been up to. Pull up a pew, kick back and enjoy our monthly blog post of what's been going on in our Holywood office.

We began the month by welcoming a new team member, Chloe McLaurin. Chloe joined us on an internship programme from Queen's University in Belfast where she is studying accountancy. With a head for numbers teamed with a dynamite personality, she has quickly become a real asset to the agency and we're over the moon to have her on board. You can find out more about the fabulous Chloe here.

In client news, June involved everything from Minions, granola and pharmaceutical nicotine to Kindle donations, clothes sales for Cancer Research UK and cool animations from our friends at Sugar Rush Creative created for an awesome TV campaign.

It has been a busy month for the Amazon team, with lots of great activity happening around the regions. The Amazon fulfilment centre in Swansea hosted a clothing donation station for staff to donate old, unwanted clothes to raise money for Cancer Research UK. The sale raised over £1,400 - a great effort by the team.

At Amazon in Gourock, the centre's charity committee made a £1,000 donation to the local Phoenix Health charity. In Peterborough, Amazon donated £2,000 and 20 Kindles to a local primary school to help boost its literary programme and also made a special £1,000 donation to help with the building of a new hospice, Thorpe Hall, in the city. In Doncaster, four staff from the fulfilment centre also raised money for Cancer Research UK by taking part in a charity sky dive. You can check out some of the press coverage this month here, here and here.

Fundraising was on the menu with foodservice firm Brakes in June when eight members of staff from the company's Lisburn HQ played golf for 16 hours straight to raise money for Macmillan Cancer Support. Led by Operations Director Andrew McMichael, the lads took on 72 holes across two local courses and are on track to raise over £1,000 for the charity. Some great press coverage appeared online as the guys made their way round the greens and fairways, including this article on Belfast Live. Good work, boys!

The local granola brand is going from strength to strength, having recently announced major distribution deals that will see the Portaferry-produced food stocked around the world. The Belfast Telegraph sat down with Just Live a Little founder Jill Crawford to talk about the family-owned brand's success and what the future holds. You can read the article on The Belfast Telegraph website.

We teamed up with the great guys at Sugar Rush Creative to put the finishing touches to a fab new animation that you'll all be seeing on your TV screens very soon…watch this space! We also helped the team at Negative Equity NI announce its latest appointment, John McMaster. John joins as Negative Equity NI's new Head of Business Strategy after a long career with Danske Bank. You can read all about John here.

Kicking off with an award from The Queen, our clients at Nicobrand celebrated winning a highly coveted accolade with a special celebratory dinner. The Coleraine-based firm was awarded The Queen's Award for Enterprise in recognition of the success of its pharmaceutical nicotine.

The Clearbox team helped the brand communicate the success to the press with coverage in titles including The FT, The Belfast Telegraph and the Irish News. Following the announcement of the award win, we created and managed a celebratory event for the team at Nicobrand, where the company was presented with a crystal bowl and scroll by Lord Lieutenant of County Down, Denis Desmond CBE in the presence of local delegates.

The fabulous eatery on Belfast's Lisburn Road was named one of the UK's top restaurants for the fourth year in a row at the prestigious National Restaurant Awards in London. Shu, the only Northern Ireland restaurant on the list for the last three years, was joined this year by North Coast restaurant, Harry's Shack. The Clearbox team helped Shu communicate the achievement to the media, with some great coverage appearing in titles like The Belfast Telegraph and Belfast Live.

June concluded with an action-packed day in Dublin with three global film stars. Stuart, Kevin and Bob from The Minions Movie invaded Dublin for 24 hours of mischievous behaviour that saw the characters visit TV3's Ireland AM, take a trip on the Luas, sail down the Liffey on a rowing boat, check out The Spire, drop in to Dublin Zoo and make a special visit to Temple Street Children's Hospital. The trio also called in to visit some of their favourite radio stations, 98FM and Spin 1038.

The Clearbox team helped organise the Minion invasion to promote the launch of The Minions Movie, in cinemas now. Some great press coverage appeared following the visit of the characters, including The Irish Independent, her.ie, The Sunday World and Evoke, to name a few.

In June, we also attended the Sunday Life Spirit of Northern Ireland Awards, where we were humbled by the inspirational local finalists who overcome so many difficulties on a daily basis. A big congratulations from everyone at Clearbox to all the winners and nominees on the evening.

That's your lot for June, folks - we'll see you again at the end of July. Thanks for reading!