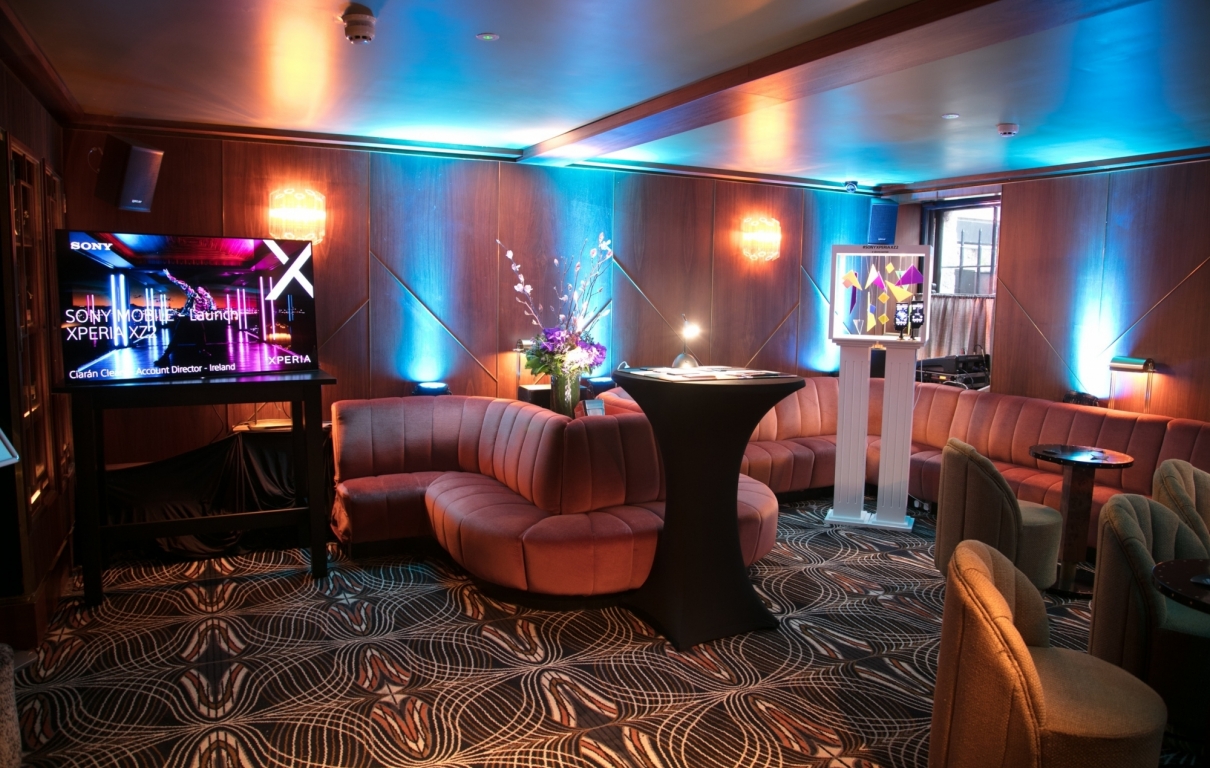 The shiny new smartphones were unveiled to the world just a few weeks back at Mobile World Congress in Barcelona, so the Sony team at Clearbox was very excited to get involved in organising the official Irish launch.

The Xperia XZ2 is jam-packed with the best of Sony technology, including the HD & 4K HDR display, Dynamic Vibration System and powerful stereo speakers. The device is designed to bring you ‘entertainment to the extreme’ by sitting at the epicentre of the Sony ecosystem, combining Sony TV, PlayStation, high-res audio and more in a single device.

We wanted to capture the essence of the new phone with an equally entertaining kick-ass launch event, which would introduce the handsets with an immersive entertainment demo session for key consumer and tech media, as well as a corporate client event in the evening.

The event took place in the intimate surroundings of the exclusive 9 Below, near St. Stephen’s Green in Dublin. We wanted to immerse guests in the world of Sony technology in an interactive way, so we designed a walk-through where each room in the venue highlighted a different element of the Sony ecosystem.

Both sessions began with an introduction by Ciaran Cleary, head of Sony Mobile Ireland. He invited guests to get hands-on with the new devices and explained the concept behind the new design.

Attendees could explore each room in turn, first experiencing the best in Sony visual technology, including TVs and the new Xperia XZ2 device. Another room was a dedicated Sony gaming paradise, with a PlayStation PlayLink demo and the Xperia XZ2 functioning as a controller. Finally, a cellar-stye room demonstrated the latest in Sony Audio with Hi-Res audio headphones and speakers. The new Xperia XZ2 device sat at the centre of each room, showing guests how the phone interacts with the entire Sony range.

What’s a launch event without nibbles though? To capture that Japanese Sony vibe, guests were offered a mix of sushi platters in the afternoon and charcuterie boards in the evening.

Guests also enjoyed complimentary drinks, including the limited edition ‘Sony Sunrise’ tall, fruity cocktail created exclusively for the launch. DJ Nialler9 kicked things up a notch in the evening with some funky house tunes while guests partied into the night.

The event brought together some key media figures from the Irish Sun, Irish Tech News, Tech Buzz Ireland, Elite Gamer and TheEffect.Net, among others, and secured some brilliant social coverage online using the #SonyXperiaXZ2 hashtag.

The launch was a great chance to introduce the XZ2 and XZ2 Compact to the Irish market, as well as showing everyone how the phone works alongside all things Sony to bring you 'entertainment to the extreme’.

We loved being part of such an exciting launch campaign and can’t wait to hear everyone’s thoughts when the device is released to market tomorrow (6th April).

For more info check out www.sonymobile.com/ie/