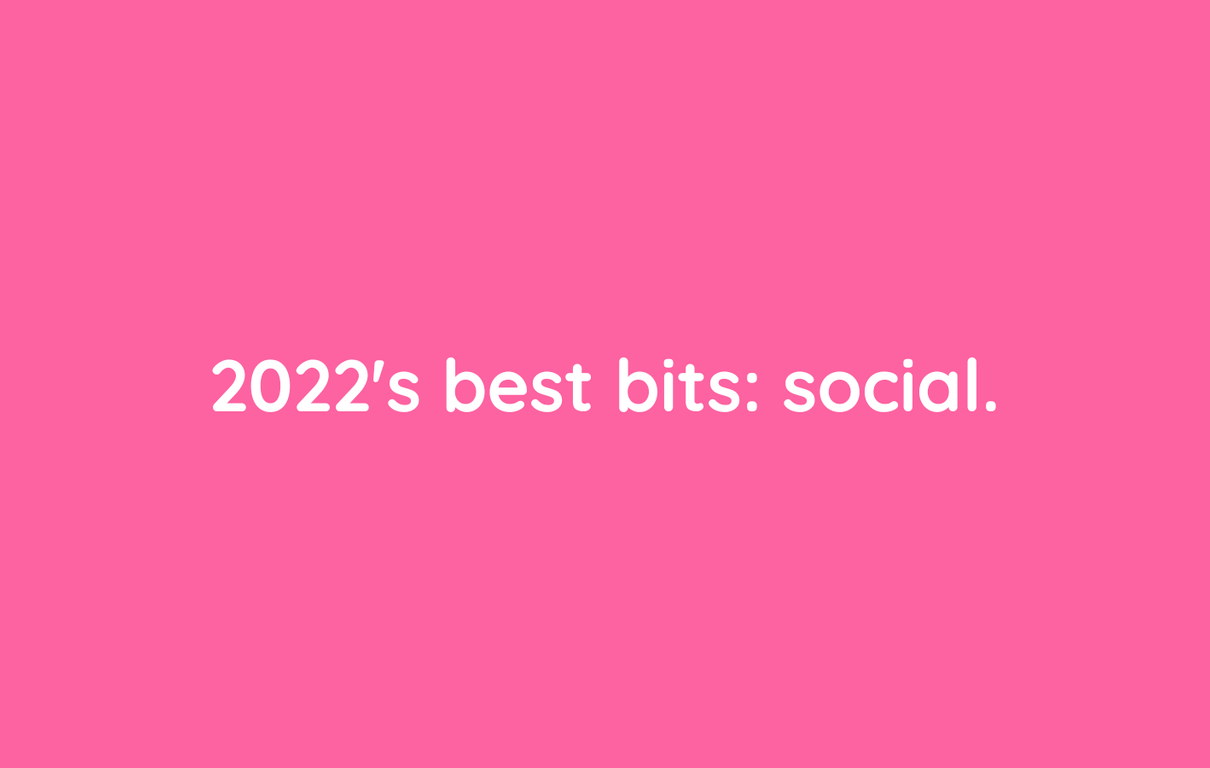 2022 has not disappointed when it comes to funny, engaging and brilliant social media campaigns.

Although there's still a few weeks left in the year, Nora's been having a think about campaigns that have impressed her this year. Expect planes, chocolate and popcorn, among other things!

This was without a doubt one of, if not the most, creative social media marketing strategies in 2022. The renowned chocolatier Cadbury set out to spread a little bit of fun during a time of social distancing and various restrictions.

The brand created a global Easter egg hunt which allowed users to ‘hide’ a virtual egg somewhere in the world while the UK was still faced with travel restrictions.

Designed for couples, friends, and family, participants had the opportunity to hide an Easter egg anywhere in the world of significance to their chosen egg recipient.

It could be where you first met, a much-loved holiday destination, where you had your first date… The trick was that you could chose a place that only the intended recipient would be likely to guess. It was possible to choose anywhere in the entire world, any city, any street at all, and place the egg. Then it is up to your designated seeker to go on the hunt to find it.

The campaign hosted two eggs-citing hiding options. One completely free, and a paid option that took the virtual and made it into reality. For £15 users were able to hide their egg, and when found, Cadburys then sent a giftset and Easter egg out in the post. Once the egg had been placed on the map, users could even go as far as leaving a clue and a congratulatory message to their chosen pal.

One downside of this campaign as fantastic as it was… I hid one for my mum and she didn’t open the link as she thought it was a spam text. Her loss I suppose, she did herself out of an Easter egg.

We kicked off the year with a TikTok storm caused by the only airline in the country to get us across the water for a tenner. Travel companies don’t tend to be known for influencing a Gen Z audience, however Ryanair has done just that.

With an ever-increasing following on TikTok, Ryanair is known for jumping on new trends and using their own passengers, and even services, as inspiration for mocking content. The social media manager behind some of the most remarkable content the company has to offer remains anonymous, appearing in the form of eyes and a mouth juxtaposed onto the front of the recognisable budget aircraft.

The mystery behind this talented content creator is something of an appeal of sorts to the younger generation; audiences are consumed by the questions surrounding the identity of the unnamed star, with various names thrown into the mix of possibilities from time to time including popular YouTuber and Influencer Olivia Neill.

When interviewed at the beginning of the year, Ryanair's Head of Social, Michael Corcoran, credited the success of the brand’s position on TikTok to be “due to the decision to 'lose the corporate tone of voice’.”

We would agree this was a great move for the company, and the landing of our most recent experience on board caused only slight whiplash; solid improvement I’d say.

Right, we all know the craic with this case, there’s no need to explain. The trial that gripped the nation… I haven’t watched 25 mins of football in my 25 years on planet Earth, but I certainly know who Coleen and Rebekah are after this Desperate-Housewives-esque scenario that led to a case in the High Court.

In the UK, with it not being legal to take actual photographs inside a courtroom, news outlets tend to commission court sketches to give outsiders a view of what’s going on behind closed doors.

The confectionary brand revamped the court sketches, creating a masterpiece which presented a captivated jury and barrister munching on their popcorn as Rebekah Vardy gives evidence, as if sat in the 4DX screen in Cineworld Belfast. 10/10 piece of art!

Short-form content is all the rage nowadays. A couple of days ago I stumbled upon a grid post from a popular influencer, stating in her caption that she ‘knew the post wouldn’t get much traction as it’s not a video’ but was posting anyway as she loved the photo.

The first thought that came to mind was reminiscent on when this was exactly what Instagram was about, a social platform launched specifically for users to share their photos with friends and family. This really hit home that video content seems to be taking over social media as of late.

Due to the rise in user demand for short form video content and brands like TikTok leading the way to global domination, the OG video platform YouTube sought a way to show its users that it’s still king of the digital video world. Stars such as DojaCat and The Weeknd were onboard to showcase their short-and-sweet content with audiences. Since the launch, YouTube shorts have become a regular part of a user’s watch experience, with many content creators utilising the new feature.

The brand originally launched its “Shorter Side of YouTube” in late 2020, to compete with TikTok’s rising status and attract its core demographic back to the platform. However, it was 2022 that most creators have jumped onboard, with Google announcing at the end of May of this year that Video action and App campaigns will automatically scale to show on YouTube Shorts, really cementing this new format into society. 2022 really has seen rise to a whole new movement of social video, with rumours that YouTube shorts may be monetised early next year.

This excellent campaign focused on the relationship between social media and self-esteem, with Dove on a mission to make beauty a source of confidence rather than anxiety.

Launched in 2021, and continued throughout 2022, #NoDigitalDistortion is a movement to help build confidence and positive body image on social media, especially among young people. Dove provided parents, teachers, and carers with a Confidence Kit resource pack, encouraging them to have the Selfie Talk with a young person in their life.

The ‘reverse selfie’ video fronting the campaign features a 13-year-old girl who had heavily edited a photograph of herself before deeming it good enough to post online. The video plays backwards, starting off with the selfie that the young girl had posted, reversing each of the various tweaks and retouches made to the image to finally reveal the true appearance of the young girl.

This video highlighted the true extent and shocking reality of the retouching done to the selfies shared on social media platforms by many young women and girls. Selfie culture has many harmful effects and there’s a real need for immediate change in this cycle.

The aim behind this fantastic campaign was to reverse the negative effects of social media and build resilience. The Dove Self-Esteem Project is working to empower young people to be their most confident selves, with an aim to build the self-confidence of 250 million young people by 2030. Leveraging power and influence, Dove is using this campaign to advocate for real beauty standards and drive a conversation to change selfie culture.