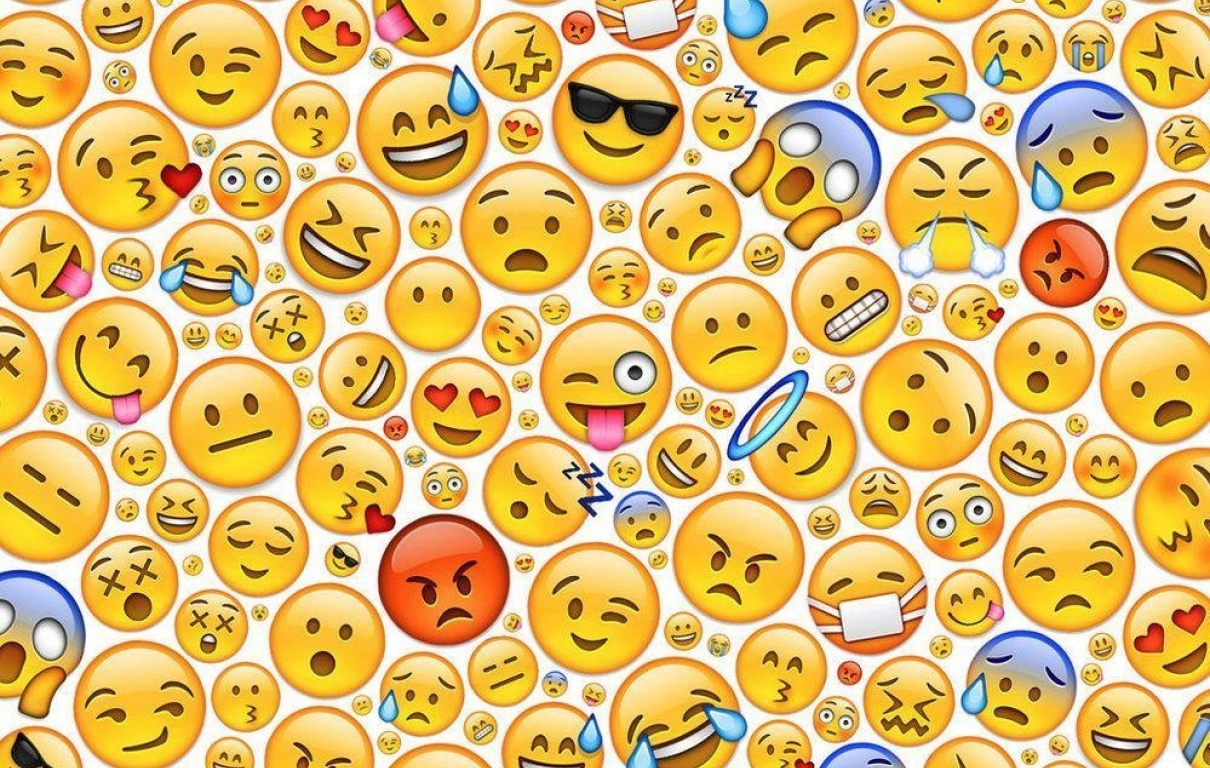 It’s World Emoji Day & Rachel loves fewer things in life more than emojis. She wanted to write a whole blog post about it, and who are we to deny people’s dreams?

Before you dive in – our website doesn’t support emojis (the new one will, fear not) so you’ll have to use your imagination…

I don’t know about you, but I love an emoji. And since today is World Emoji Day, I thought I would pay tribute to this modern language system which has had such a profound impact on popular culture.

With over 10 billion sent daily, there exists a plethora of emojis for us to choose from – with genres ranging from facial expressions, to country flags, to weather symbols, to common objects.

Before becoming a popular means of electronic communication in Western civilisation, emojis first appeared on Japanese mobile phones in 1997. From then, emoji popularity turned global when Apple released them with the iOS 6 update. In 2015, Oxford Dictionaries even named the “Face with Tears of Joy” emoji the Word of the Year.

I think we all tend to presume that the term “emoji” is purposefully similar to the English word “emotion”, but that is in fact coincidental. “Emoji” is a Japanese term, with “e” (絵), meaning “picture”, and “moji” (文字) meaning “character”.

The world has become obsessed with emojis because they have the power to break down language barriers, and they add extra layers to conversations. However, emojis can be controversial, ambiguous, and equally confusing. For example, have you ever thought the “Pile of Poo” emoji was chocolate ice-cream with a smiley face? Yea me neither…

The woman crossing her arms is often perceived to symbolise combat. I myself often use it to communicate something along the lines of “no way – I am NOT taking this sh***!!!”

I often use the emoji of the lady holding her arms up to express a dance move of some sort, without knowing its true meaning. However, I can now reveal that this emoji in fact is meant to symbolise “okay”. The use of [x] for close and [o] for open come from the Japanese symbols batsu and maru. Batsu (x) is the symbol for incorrect while maru (o) means correct. Every day is a school day, right?

Here are some more fun facts I learnt about emojis as I went about my research:

- You can read the entire Moby Dick story in emoji – I mean, it’s not something I would read myself, but it’s still pretty cool.

- The “dab” emoji is the most requested emoji – watch this space people!!

- Multiple arrests and imprisonments have followed the use of the pistol, knife and bomb emojis, as authorities deem these to be constitute credible threats. (I always thought it was a water gun…)

- China’s Twitter-like service, “Weibo”, blocks the #MeToo hashtag. But Chinese feminists found a way around it by using the “rice” and “bunny” emojis, as when spoken aloud, the words for “rice bunny” are pronounced “mi tu” – a homophone for “me too” that cleverly evades detection.

- Research has found that those who drop the archaic use of consonants and vowels and replace them with emojis tend to have more romantic escapades than those who don’t.

Most consider that the girl flicking her hair emoji is used to represent sassiness. In fact, this is an “Information Desk Person” emoji was initially created to represent a person at an information desk providing people with answers to their questions.

Many use the sleepy face as a crying face with a tear falling to the side, but the 'tear' actually represents a snot bubble, which is used to show that someone is sleeping in anime and manga art.

I was curious to see what the each of the Clearbox team members considered to be their favourite emoji – here’s what they said:

My favourite emoji has to be the Spanish dancer. I use it for everything, and I always imagine she’s doing a little double hand click in the air like Ross does when he exclaims that he’s going to make a pitcher of margaritas! I use it for excitement, agreement and just when you want to say YES!

My favourite, and probably most used, emoji is a variation of the applause or raised hands.

You can usually use one or the other for most texts, so it’s become my shorthand response and they bring a bit of energy.

I also love EMPHASISING (claps) MY (claps) POINT (claps). What is a group chat without some sass?

I am naturally quite a sarcastic person, so this emoji brings much needed context to my on-line communication, which was previously satisfied by the use of ‘lol’. It is always on my recently used emoji list and I don’t see it being knocked off my number one spot anytime soon.

It’s so hard to choose just one favourite emoji, it really does depend on the situation! So I’ve gone with one from my most used, and it’s the heart eye emoji. It’s fun and positive and can be used for many different situations - to show love, approval or appreciation and it needs little explanation.

Ah, it’s really hard to choose just one all-time favourite emoji. My most used is definitely smiling face with hearts, but my favourite to use is the notorious sassy girl. She just adds a touch of sass and a cheeky personality to a message in a ‘who, me?' kind of way. Apparently, this emoji is actually an information desk woman though, which I choose to ignore because I refuse to believe that a single person has ever used it for this meaning.

I’m one of those weird people that really doesn’t use emojis… I’m a full stop, properly punctuated sentence kind of communicator, which I’m well aware makes me come across more blunt than I actually am. That being said, I love the little face with the party hat and confetti. He’s having a great time.

My favourite emoji would have to be the man shrugging emoji – it can be used to convey a vast range of emotions! If you don’t know the answer to something, if you’re unsure of what to say in general, or if you’re stuck in a group chat and get lost, it’s my go to. So handy.

My all-time favourite emoji has to be the smiley face with the cowboy hat. It just SCREAMS enthusiasm and good vibes – what I am all about. However, sometimes people think that I’m being sarcastic or cheeky when I use it, but I promise I am not.

I love the starry-eyed emoji. You can apply it to many a situation and can be used without a sentence or words supporting it- it speaks for itself.

My favourite emoji is the “open mouth” emoji because it’s one of the original emojis, but I prefer writing it like ':o’. I also express laughter by using t ‘:L' instead of the “Face With Tears Of Joy” emoji, because it reminds me of the Bebo and MSN days.

They are like the cool, vintage emojis now you could say…

This was a difficult one. To ensure I provided a well thought through answer to this, I had a browse through my most used emojis. Well that was telling about my character… Can I have three? But yes, if I’m narrowing it down, it would probably be the heart emoji. And after some thought, that’s probably because it expresses some sort of emotion that can’t easily be put into words. It can be used in many a situation and ultimately has a range of different meanings. That being said, the emotion and the sentiment behind it is always a positive one. We all love bringing a bit of love to other people.

To conclude, whether you are a fan of them or not, emojis make up a fun, expressive, multifaceted language system which is definitely here to stay. Moreover, if I was to sum up 2020 in an emoji it would have to be the wrinkly faced emoji. He looks pained. I just feel it represents how MAD the year has been so far.

My WhatsApp is mainly about football and music so it’ll be the swearing face emoji (thanks Arsenal/BUFC) and the Aladdin Sane one. That’s the emoji with the lightning bolt on its face, for the kids.